Nate Hartley first joined Advance Global Capital in April 2014 as Chief Investment Officer. He provided key leadership and support during the start-up phase of the business: refining the business model, obtaining FCA authorization, and managing the build-out of the technology and origination teams. In January 2016, the AGC Board added CEO to Nate’s responsibilities. We spoke to Nate about his experience and plans for the company.

How have your experiences prepared you for the role of CEO at AGC? 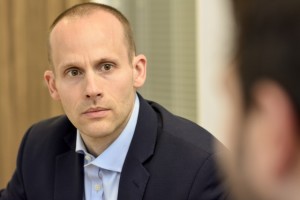 I began my career as an officer in the U.S. Army, which provided a useful grounding in the management of diverse teams of 30 to 100 people, functioning in a high-stress environment to achieve a desired objective. After the military, I worked as a manufacturing engineer in Silicon Valley and then in the financial industry at Credit Suisse before pursuing my MBA at the University of Chicago Booth School of Business with concentrations in analytic finance and accounting.

As a director at Barclays, I helped establish a debt financing business focused on emerging markets clients while also serving as business line treasurer for the emerging markets trading business. I managed liquidity for dozens of trading desks across 20 countries and 3 regions with 5 direct reports. My work took me to over 40 countries, which provided valuable insight into local economies as well as exposure to local languages and customs.

In 2014, I became the 2nd employee of AGC. It was an opportunity to be part of a new company with a pioneering idea. We had many decisions to make, such as where we operate, who is on the team, how we operate, and what products we offer. The team is ready to execute at scale on the pioneering work that has been done.

What are some leadership lessons you’ve learned in your career?

Having a superman attitude is unproductive. As an organization grows, the scale of challenges becomes larger than the capacity for even the most skilled individual to address on their own. Hence, being able to function within a team and to identify what motivates team members is very important. It’s also vital to provide people with a goal without being too prescriptive. Giving people the capacity to control their own destiny and capitalize on their unique strengths to accomplish things is much better than expecting them to be exactly like you.

What are the strengths of the current AGC team?

We have a good combination of proven experience in emerging markets and asset-based lending. The team is culturally and globally diverse. Our technology team is very experienced in running software for small businesses. Cross functional expertise enables the team to pivot quickly and have conversations with the right people in the right places. We recently tallied where we had worked and done business, and came up with combined experience in almost 100 countries and fluency in 12 languages.

What drew you to emerging markets as a focus area?

I have always had an interest in geopolitics and travel and so it seemed a good fit when I got to Barclays. There is an element of the unknown in emerging markets that is difficult to quantify and build models around. So, intellectually, these countries contain much more challenging issues to address. Investing in SMEs in emerging markets can’t be done behind a Bloomberg terminal. Understanding the culture of a country goes a long way towards explaining attitudes towards money, business, and the acceptance of written (and verbal) agreements. An over-reliance on models without judgement can be risky, as we saw in the 2008 financial crisis. One should use both equally.

What has surprised you most about spending time in so many different countries?

One thing I see is how similar people are in their aspirations. Regardless of where you go, people want to be safe, have a roof over their heads, and a good future for their children.

Most people are willing to go out of their way to help you. One time when I was on business in Kenya, I had an Indian taxi driver who would only accept dollars. So I had him drive me to a Barclays bank. It was staffed by expats from Hong Kong, who serviced people from China living in Kenya. In that moment, I truly understood that we live in a global world. Despite our differences in language and culture: we all just want to be happy.

Human potential inspires me. I grew up quite poor in the US. I seem to encounter more people with my background in developing countries than I do in western ones. When I work with clients and customers in emerging markets, I feel like I understand their lives, the risks they are taking, and the potential they have.